Animated History of The NYC Subway

Kinda Cool...
View in sequence the growth of the NYC Subway

Posted by Rich Coffey at 7:18 AM No comments: In 1960, the archaeological remains of a Norse village were discovered in Newfoundland by two Norwegians, the explorer Helge Ingstad and the archaeologist Anne Stine Ingstad (husband and wife).Dating to around the year 1000, L'Anse aux Meadows is widely accepted as evidence of pre-Columbian trans-oceanic contact. It is notable for its possible connection with the attempted colony of Vinland established by Leif Erikson around the same period or, more broadly, with Norse exploration of the Americas.

Posted by Rich Coffey at 5:22 AM No comments:

Email ThisBlogThis!Share to TwitterShare to FacebookShare to Pinterest
Labels: Dominion of Newfoundland

I recently took this book out of the library and the details of the Balkan genocides during World War Two absolutely shocked me into posting this.

The infamous Nazi concentration camps, the Holocaust and Stalin’s Gulags are well-known tragic gruesome facts of history but the brutality of the Croatian Ustaše and other mass murders in the Balkans during World War Two are sadly not as publicized.

Historically, Yugoslav lands have been located in the "fracture zone" between East and West. Christianity vs. Islam, Catholic vs. Orthodox -- the rivalries and tensions ran deep.

Following centuries in which the territories had been divided between the Ottoman Empire and Austria-Hungary, Yugoslavia came into existence after World War I under the name of the Kingdom of Serbs, Croats and Slovenes in 1918. It was renamed the Kingdom of Yugoslavia in 1929 and was invaded by the Axis powers in 1941.

After World War II, in 1946, Yugoslavia was renamed the Federal People's Republic of Yugoslavia when a communist government was established. After Tito's death in 1980, ethnic tensions grew in Yugoslavia.

In the 1990s, the country disintegrated into full scale internal war which culminated in the Siege of Sarajevo and the tragic Srebrenica massacre. From 1992 to 1996, Sarajevo suffered the longest siege of a city in the history of modern warfare (1,425 days long) during the Bosnian War. The Srebrenica massacre was the genocidal killing, in July 1995, of more than 8,000 Muslim Bosniaks, mainly men and boys, in and around the town of Srebrenica during the Bosnian War.

This post will focus primarily on the period during World War Two when the region was divvied up between Axis powers and the mind-boggling huge volume of mass murders and ethnic cleansing that took place.

In 1941, the territory of Yugoslavia was swiftly conquered by Axis forces and partitioned between Germany, Italy, Hungary, Bulgaria and client regimes. From this point on it gets complicated. Not only were the "locals" involved in fighting their occupiers, simultaneously they were involved in fighting each other...

After the partition of the region by the Axis powers, a guerrilla liberation war was fought against the Axis occupying forces and their locally established puppet regimes, including the Independent State of Croatia and the Government of National Salvation in Serbia, by the Communist-led republican Yugoslav Partisans.

The human cost of the war was enormous. The number of war victims is still in dispute, but is generally agreed to have been at least one million. Non-combat victims included the majority of the country's Jewish population, many of whom perished in concentration and extermination camps.


Croatia and the Ustaše

The United States Holocaust Memorial Museum has estimated that Ustaša authorities murdered between 320,000 and 340,000 ethnic Serb residents of Croatia and Bosnia between 1941 and 1945 (the period of Ustaše rule), of whom between 45,000 and 52,000 were murdered at the Jasenovac concentration camp alone.

The scale of the atrocities shocked even German and Italian occupying forces. The Ustaše considered any "undesirables" were subject to mass murder.  The strategy to achieve their goal was:

The Jasenovac Concentration camps
These mass-executions took place at various locations. At the "Granik" camp, internees were hung by a crane, had their intestines and necks slashed, then were thrown into the river after being hit by blunt tools in the head. Later, inmates were tied in pairs, slashed in the stomach and thrown into the river while still alive.

At a ceremony on October 9th, 1942, Vjekoslav "Maks" Luburić, the commander-in-chief of all the Croatian camps, announced the great "efficiency" of the Jasenovac camp. During the banquet which followed, he bragged: "We have slaughtered here at Jasenovac more people than the Ottoman Empire was able to do during its occupation of Europe.”

Greater Serbia is the ideology to unite all Serbs (or all territory historically ruled or populated by Serbs) into one state, claiming, depending on the version, different areas of many surrounding countries. Greater Serbia would incorporate all regions of traditional significance to Serbs, including regions outside Serbia that are populated by Serbs.

During the World War II Axis occupation, the Serbs were divided into two factions, (1) the resistance was mainly made by the Chetniks, who defended the restoration of the Monarchy, and (2) the Partisans, who supported the creation of a communist Yugoslav state.

During the World War II, the Serbian royalist Yugoslav Army attempted to define its vision of a postwar future creating an even larger “Homogenous Greater Serbia”, incorporating not only Bosnia and much of Croatia but also chunks of Romania, Bulgaria, Albania and Hungary in areas where Serbs don't represent a significant minority.

In the territories under their military control, Chetniks applied a policy of ethnic cleansing and terror tactics against ethnic Croats and Bosniaks. These terror tactics took various forms, including killing of the civilian population, burning of villages, assassinations and destruction of property. The terror tactics used by the Chetniks against the Croats were a reaction to the terror carried out by the Ustaše, but Croats and Bosniaks living in areas that were intended to be part of Greater Serbia were cleansed of non-Serbs regardless…

Throughout the war, the Chetnik movement remained mostly inactive against the occupation forces, and increasingly collaborated with the Axis, eventually losing its international recognition as the Yugoslav resistance force. After the fall of Belgrade to Soviet and Partisan troops in 1944, there was little hope of the Chetniks surviving as a legitimate fighting force in Yugoslavia and in 1945, the victorious Partisans took possession of the country's territory.

Bleiburg Repatriations
The Bleiburg repatriations were a series of events that took place after the end of World War II, when tens of thousands of soldiers and civilians associated with the Axis fleeing Yugoslavia were repatriated to that country. Thousands were murdered or subjected to forced labor camps.

The modern-day consensus is that the number of deaths of the forced marches and in death camps rose to tens of thousands, and included civilians. The exact number of those who met their death in Bleiburg is impossible to ascertain accurately. The number of victims has been inflated by pro-Ustaša sources for propaganda purposes, while communist sources have been diminishing it for similar reasons. 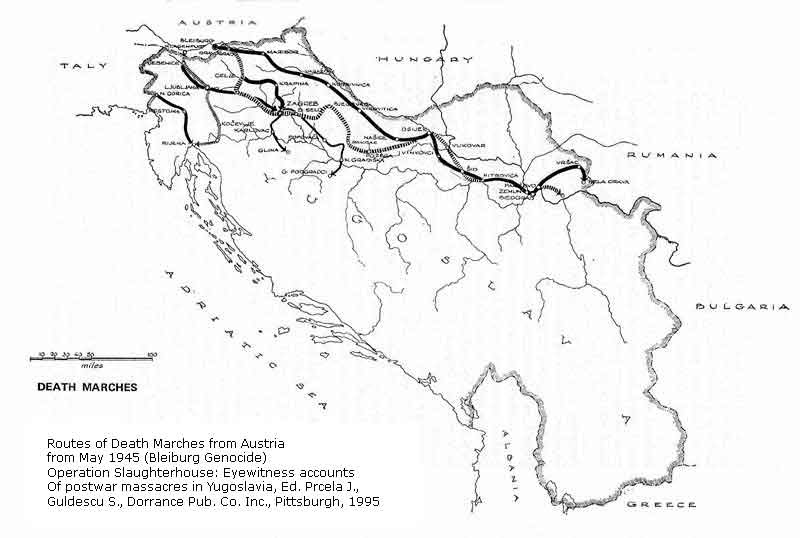 The remainder of the Ustaše, and their supporters in the Croatian diaspora, used Bleiburg as their central myth and used as a tool for historical revisionism  The number of victims were artificially inflated...


David Bruce MacDonald wrote:
“Inflating the numbers of dead at Bleiburg had several layers of significance. Firstly, it gave the Croats their own massacre at the hands of Serbs and/or Communists, which allowed them to counter the Serbs' Jasenovac genocide with one of their own”

A seemingly impossible hodgepodge of various ethnic groups make up the Yugoslavia region.

The deep-rooted distrust between these various ethnic groups and its history of violence and genocide inevitably led to the conflicts and continued mass murders that took place in the 1990s. 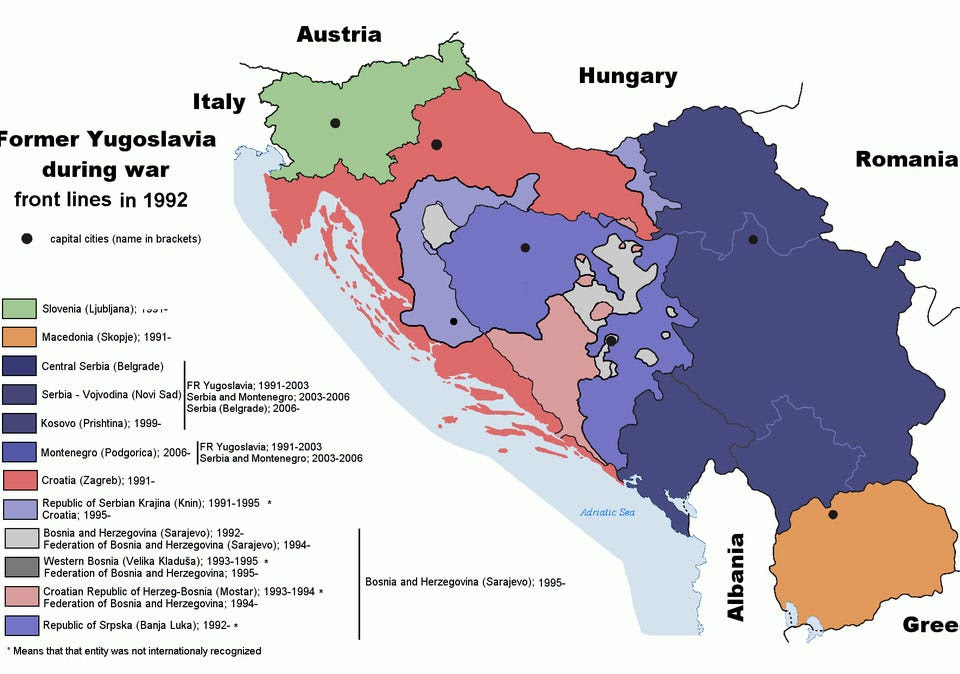