Being equally fascinated with historical maps AND Native American history in upstate New York where I grew up - this post is a result of online research. There is a wealth of materials out there if you look :-)

Click on any Map for an enlargement and better yet, go to the link provided to see the the full version where you can zoom in and pan

New York State Library - Native American Materials
The New York State Library holds a wealth of first hand descriptions of the Native American experience in New York. These resources span four centuries, beginning with the Dutch colony of New Netherland and continuing to the close of the American frontier in western New York and beyond. Original manuscripts and maps serve as lenses through which cultural and historical interpretations can be made.

The Five Nations - 1747
A map of the country of the Five Nations belonging to the Province of New York, and of the lakes near which the nations of far Indians live, with part of Canada.
Created By: Bradford, William, 1663-1752
http://purl.nysed.gov/nysl/51719615 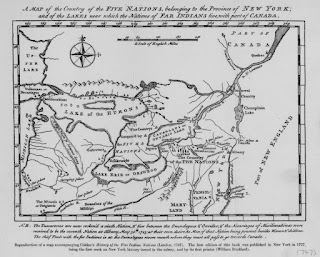 Six Nations and New York Province - 1771
Copied from the original map drawn by Guy Johnson in 1771, this map was printed in The Documentary History of the New York by E. B. O'Callaghan, volume 4, page 661.
Created: 1851
Guy Johnson came to American in 1756 and was the Irish-born nephew, son-in-law and protégé of Sir William Johnson. He became a deputy to Sir William Johnson in his uncle's position as British Superintendent of Indian Affairs and succeeded him when William died in 1774. 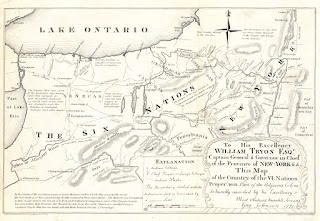 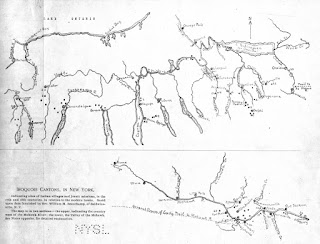 Indian Trails in New York State - 1755
Map showing trails, portages and settlements from Albany to Niagara during Sir William Johnson's tenure as "Sole Superintendent of the Affairs of the Six United Nations, their Allies and Dependents" which he held from 1755 until his death in 1774.
Created by: Mitchell, Louis (based on the papers of Sir William Johnson, outline of trails furnished by W.M. Beauchamp)
http://purl.nysed.gov/nysl/44714090 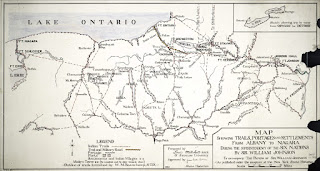 For more than 3,000 years, this alluring isle of stone in the Hudson River north of present-day Kingston has beckoned strangers.  Native Americans took shelter in a west-facing sandstone rock shelter and pulled mounds of shellfish from the river.
Strangers still come to Magdalen, but now they arrive with shovel in hand to dig up arrowheads and other prehistoric artifacts illegally. Because Magdalen is half a mile from the Dutchess County shore, they work undetected and largely undisturbed. The quarter-mile-long island is so pockmarked with looters’ holes that parts look more like a bombing range than a state-owned parcel of land listed on the national and state registers of historic places.

Did you know about Kinaquariones?
Site of archaic Algonkian village. and old trail
Ganondagan
Location of the largest Seneca village of the 17th century, Ganondagan is now a State Historic Site.


Kanatsiohareke
Kanatsiohareke is a small Mohawk community on the north bank of the Mohawk River, west of Fonda, New York. The name means "The clean pots” or “Place of the washed pail”. 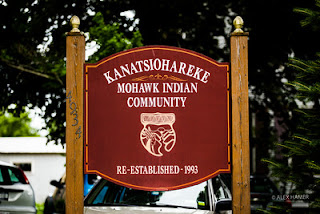 Ganienkeh
Ganienkeh (meaning Land of the Flint Mohawk), is a Mohawk community located on about 600 acres near Altona, New York in the far northeast corner of Upper New York State. Established by an occupation of militants in the late 1970s, it is a rare case in which an indigenous people reclaiming land from the United States "succeeded".

Kahnawà:ke
Kahnawà:ke is one of eight territories that make up the Kanien’kehá:ka (Mohawk) Nation. The Mohawk Nation is a member of the Haudenosaunee or People of the Longhouse
Six Nation Iroquois Confederacy.
History & Culture 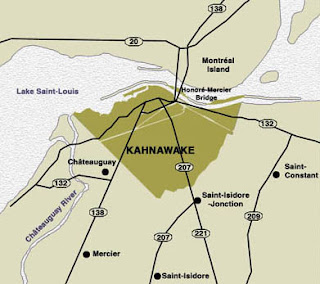