"Making a Killing" by Streaming

Even though worldwide streaming revenues increased by almost 40 percent in 2014 as the number of subscribers grew from 28 million in 2013 to 41 million, artists are paid virtually nothing via streaming music sites like Spotify and Pandora. But as many have put it "the genie is already out of the bottle"... 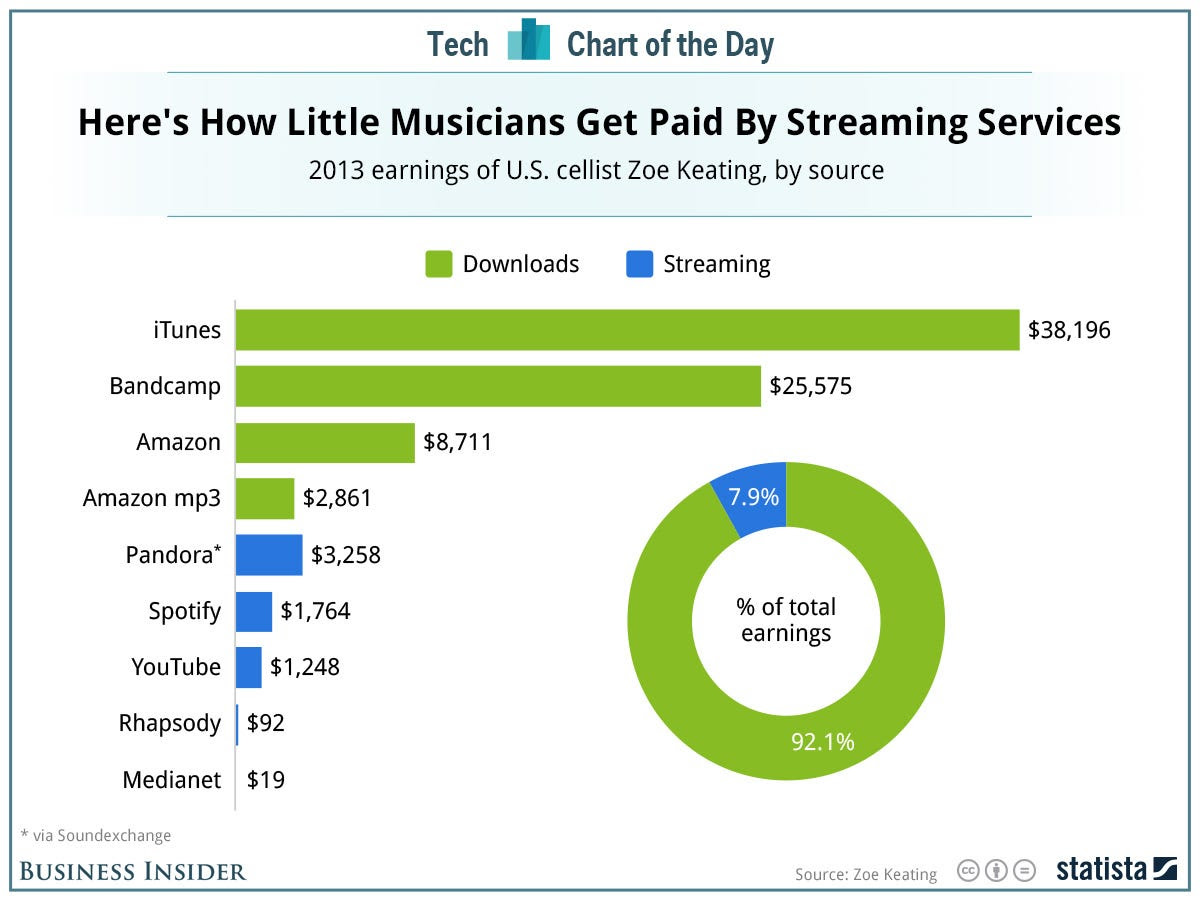 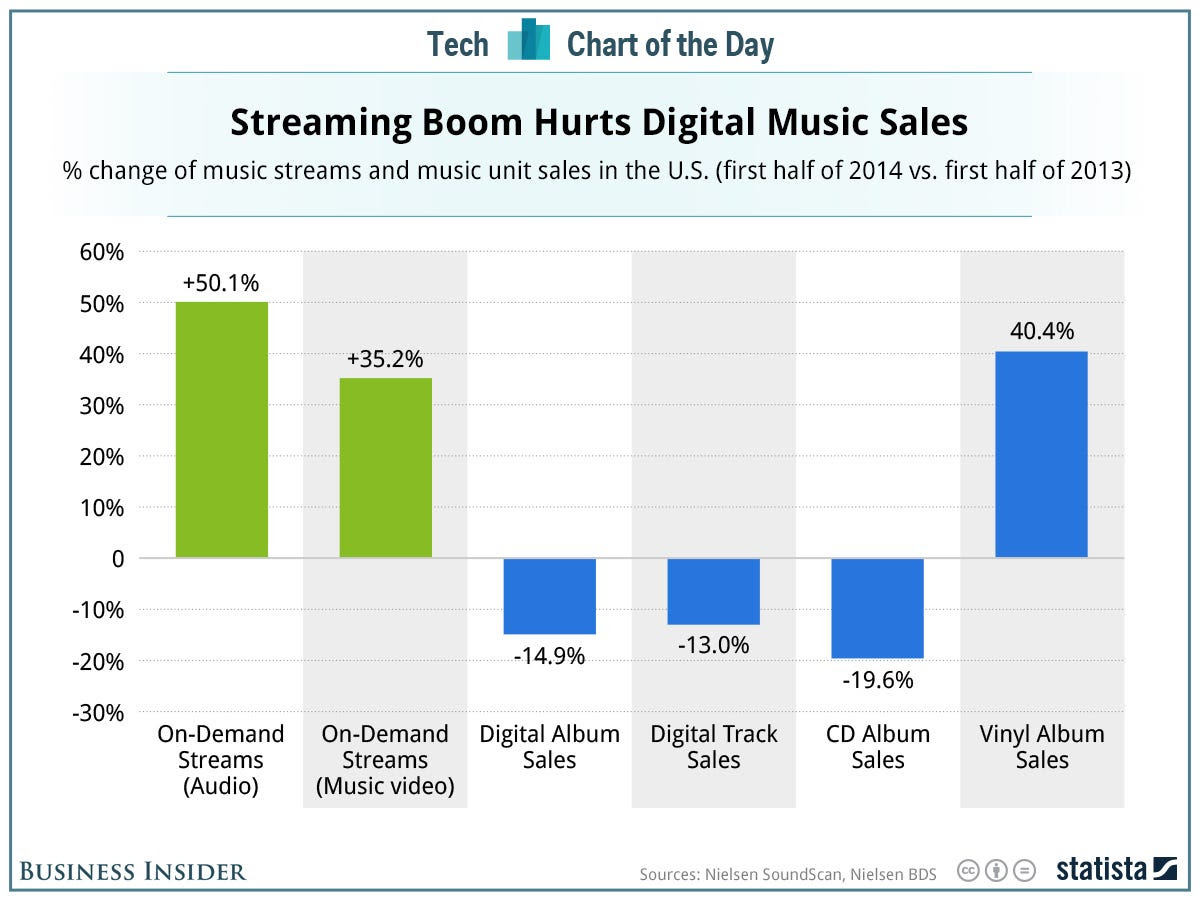 The Rapid Rise of Digital Music >

Revenue? (not for the creators - just the distributors!) 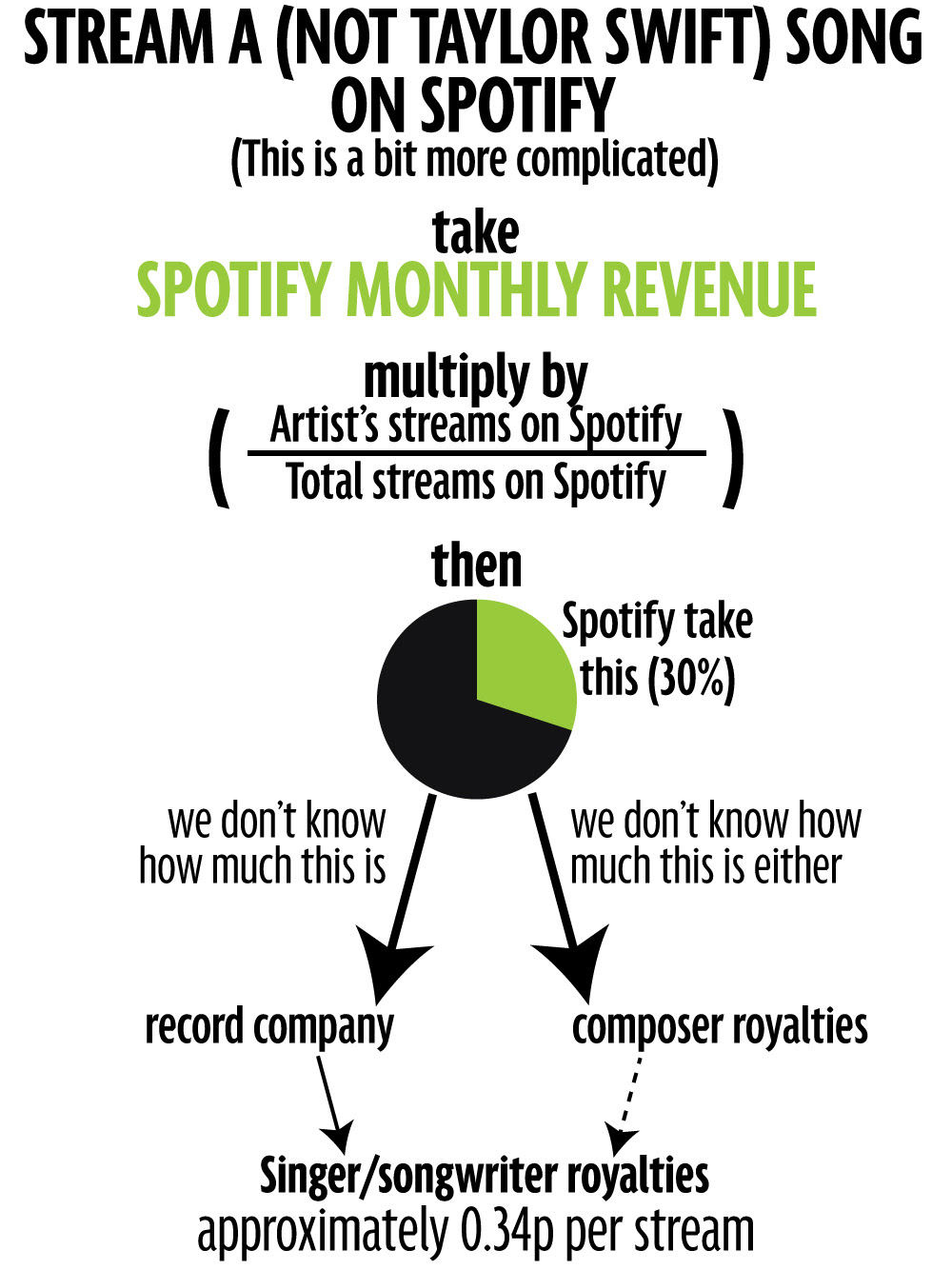 Money For the Songwriter ? >

Taylor Swift is right: Music can’t survive if you don’t pay for it. The average artist needs around 150 Spotify streams to equal the payout of a single $.99 download. Streaming services are killing digital download sales, with Pandora and Spotify leading the pack.

Posted by Rich Coffey at 5:02 PM No comments:

This work is outstanding!! 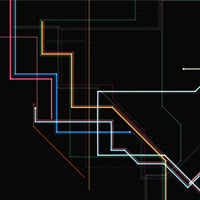 - A tribute to Les Paul. 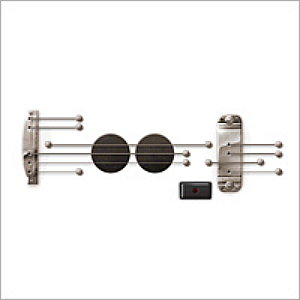 Pianophase.com -
A performance and visualization of the first section from
Steve Reich's 1967 piece Piano Phase. Posted by Rich Coffey at 5:29 AM No comments:

More than 750 million olive trees are cultivated worldwide, 95% of which are being planted in the greater Mediterranean region. In terms of global olive oil production, 3/4 come from countries of the European Union, among which the 97% of olive oil is cultivated and produced in Spain, Italy and Greece. 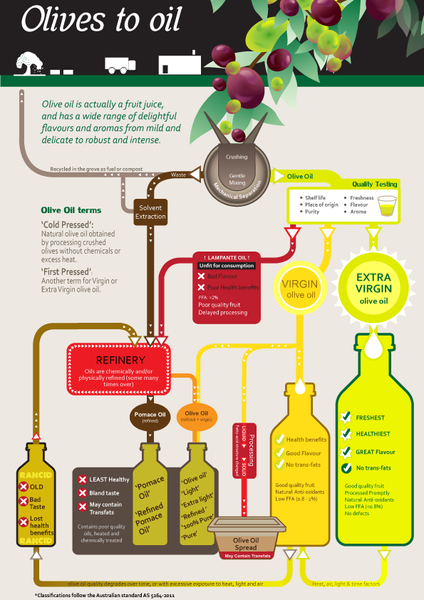 Superior Greek oil is blended with other countries’ oils to raise their quality.
A considerable amount of the economy of Greece is based on olive oil exports. Although Greece produces the largest quantity of virgin olive oil in the European Union (EU), the economic returns generated from sales of what is a premium product have been disappointing.

The majority of Greek exports are in the form of bulk generic oil that is subsequently packaged in Italy as well as some other countries. Bulk generic oil cannot garner price premiums; thus the potential of what is a superior quality product is wasted.

Olive oil from Greece is top-quality. The olive oil industry outside of Greece use Greek olive oil to improve the quality of their final products through blending and to increase their sales. Importers mix lower quality domestic olive oils with superior quality Greek imports.

Sadly, as Greek olive oil cannot be identified by final consumers, any attempt by the Greek industry to expand its market share in international markets is unlikely to be successful. The difficulties lie with both the Greek processing sector and the barriers to entry erected by importing firms.

The recent gradual revaluation of the Euro against the U.S. dollar has meant a negative environment for exports to the United States, as well as to countries with currencies tied to the U.S. dollar. Further, Mediterranean countries that are not EU members can utilize this situation to their advantage and become more price competitive

Most production takes place on small farms and in family-run businesses. While the domestic olive oil market absorbs a considerable portion of national production, exports are still significant and primarily focused on the EU market. Italy is the most important export market, receiving more than 75 percent of total Greek olive oil exports - blending as discussed reduces value significantly.

The other crucial factor causing poor competitiveness is the large number of small agricultural holdings in Greece specializing in olive trees. Beyond increasing the cost of production, they dramatically reduce the bargaining power of producers when they negotiate the selling price of their product. Further, while many farmer cooperatives exist, they perform poorly, leaving room for private buyers to pay lower prices to producers.

____
Source:
Greek Olive Oil: How Can Its International Market Potential Be Realized? (PDF)

Posted by Rich Coffey at 6:05 AM No comments:

Russian Empire's conquest of the Caucasus lasted approximately 101 years. The Caucasian War (1817–1864) was an invasion of the Caucasus by the Russian Empire which resulted in Russia's annexation of the areas of the North Caucasus, and the ethnic cleansing of Circassians.  It consisted of a series of military actions waged by Russia against territories and tribal groups in Caucasia.
Caucasian War (Wikipedia) >

Russian control of the Georgian Military Highway in the center divided the Caucasian War into the Russo-Circassian War in the west and the Murid War in the east.

In the western or Russo-Circassian War the tribes did not unite and the war was very complex.

In the east. the tribes joined in the Caucasian Imamate, a military-theocratic state which held out for thirty years.
Murid War (Wikipedia) >

Other territories of the Caucasus were incorporated into the Russian empire at various times in the 19th century as a result of Russian wars with Persia. 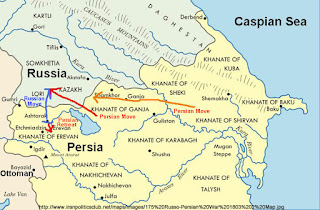 Circassia refers to a region the majority of whose inhabitants before 1860s were the Adygey (Adyghey, Adyghe) ethnic group, known to the West as Circassian.

The Unrepresented Nations and Peoples Organization estimates that there are as many as 3.7 million "ethnic Circassians" in the diaspora outside the Circassian republics (meaning that only one in seven "ethnic Circassians" lives in the homeland).
1821–1822  and 1863–1864
The Caucasian War ended with the signing of loyalty oaths by Circassian leaders on 2 June 1864. Thereupon, Russia undertook the expulsion of the entire indigenous Circassian population, herding them to Black Sea ports for deportation to neighboring Anatolia.

Over the course of hundreds of raids the Russians drove the Circassians from their homeland and deported them to the Ottoman Empire. At least 600,000 people lost their lives to massacre, starvation, and the elements while hundreds of thousands more were forced to leave their homeland. By 1864, three-fourths of the population was annihilated, and the Circassians had become one of the first stateless peoples in modern history. 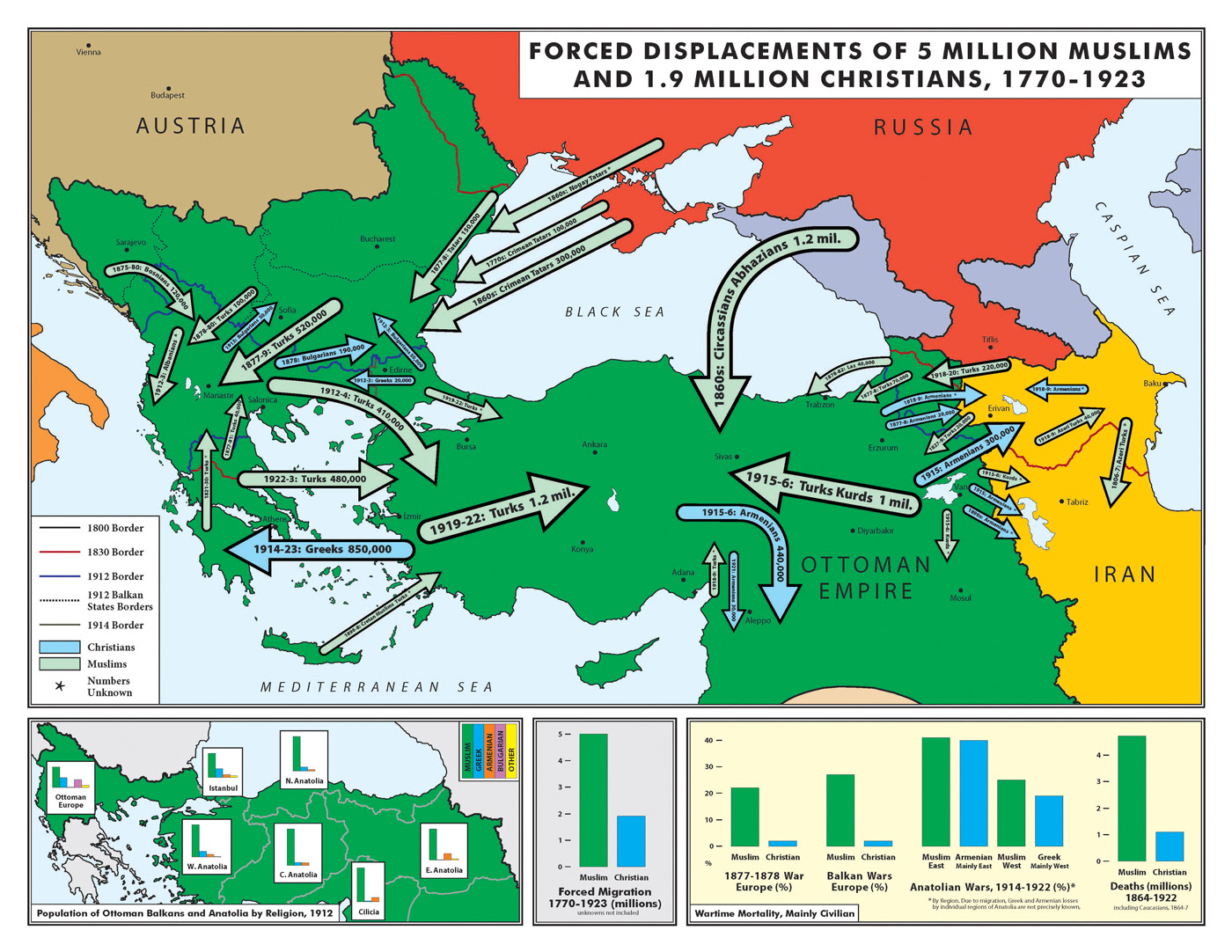 
Armenia and the Armenian Genocide

Armenia
In the first century BC the Kingdom of Armenia reached its height under Tigranes the Great. Armenia became the first state in the world to adopt Christianity as its official religion. Armenians have their own unique alphabet, which was invented by Mesrop Mashtots in 405 AD.

Between the 16th and first half of the 19th century, the traditional Armenian homeland which stretched in to much of western Anatolia came under rule of the rivaling Ottoman and successive Iranian Empires, passing between the two over the centuries. By the mid 19th century, Eastern Armenia had been conquered by Russia from Qajar Iran, while most of the western parts of the traditional Armenian homeland still remained under Ottoman rule. 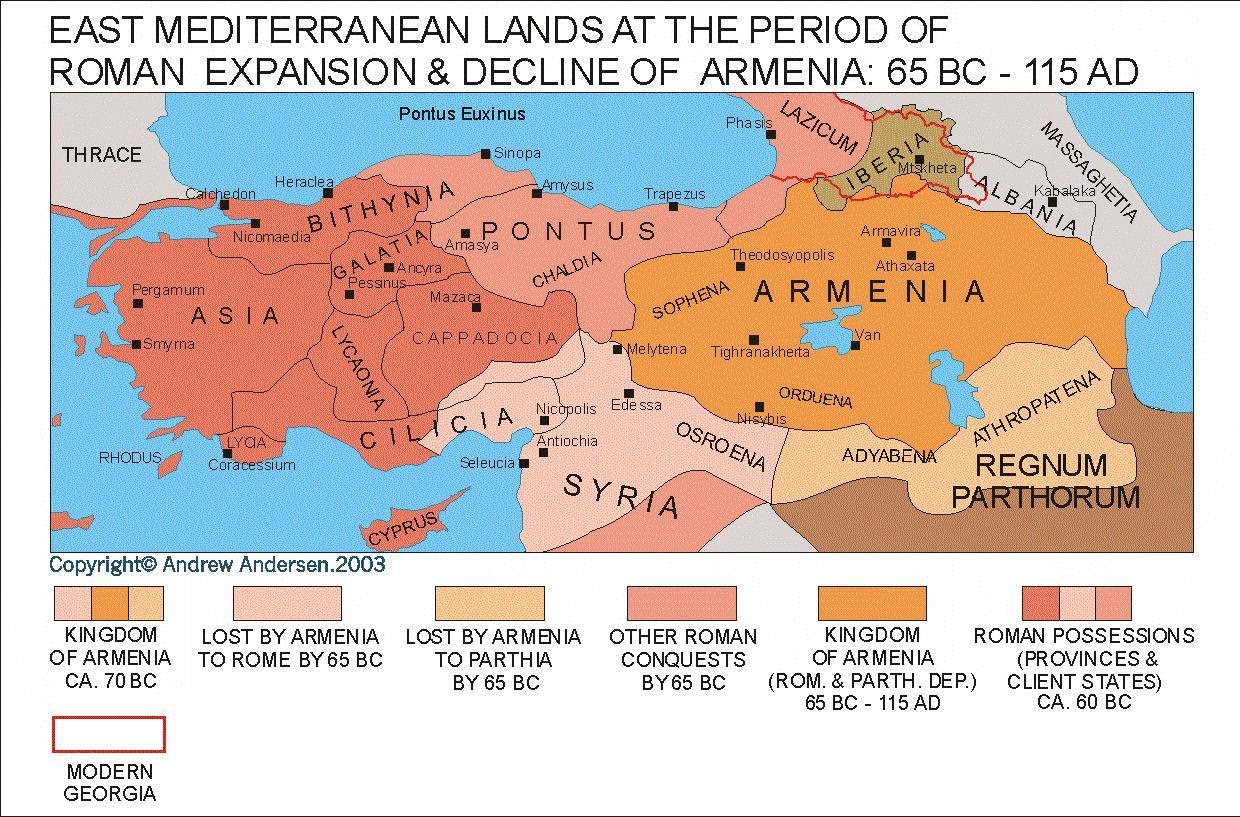 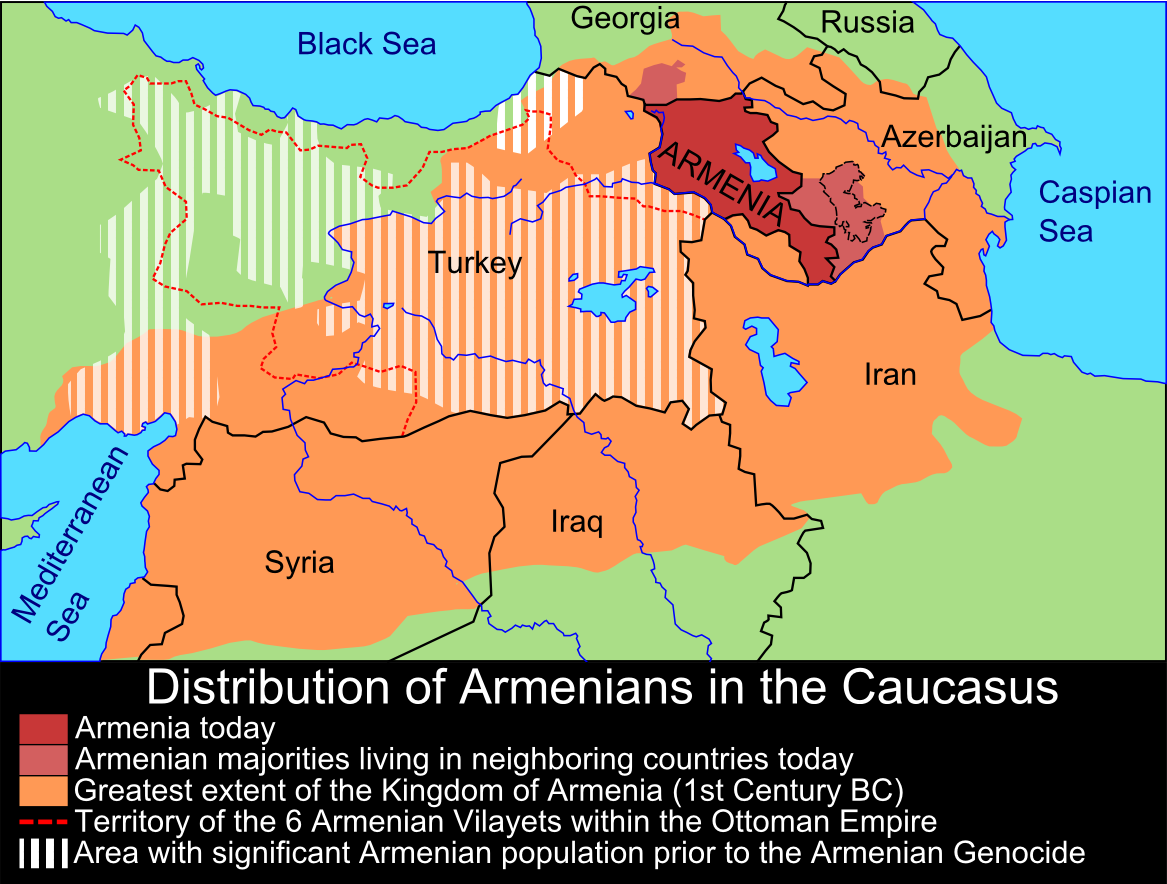 Armenian Genocide
The Destruction of the Ottoman Armenian population took place during and after World War I and was implemented in two phases: the wholesale killing of the able-bodied male population through massacre and forced labor, and the deportation of women, children, the elderly and infirm on death marches to the Syrian Desert.[The total number of people killed as a result has been estimated to range from 600,000 to 1,500,000. 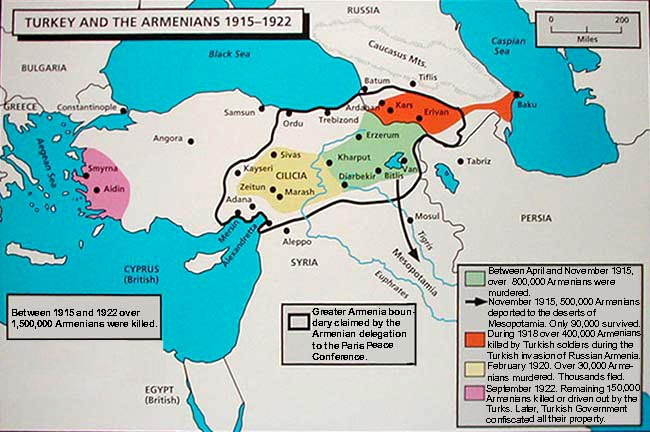 Following the wider patterns of most states emerging from the collapse of the Soviet Union, the three main countries in this region (Armenia, Azerbaijan and Georgia) saw patterns of mass emigration in the 1990s. Ethnic tensions and the constant escalation of conflicts in the region has created numerous groups of Internally Displaced Persons (IDPs) and refugees.

Atlas of the Ethno-Political History of the Caucasus Hardcover by Arthur Tsutsiev
Posted by Rich Coffey at 9:25 AM 2 comments: 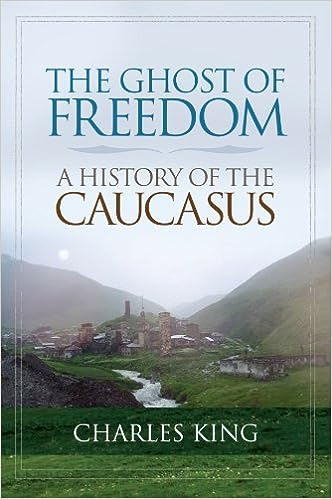 It is a fascinating yet complicated region and truthfully--because of the multitudes of languages, ethnic groups and ever-shfting allegiances--the book was hard to follow. Nevertheless I still would recommended it. The region has been cast as an untamed exotic place, filled with mysterious intrigue and dangerous allure and its history justifies that description.

The Caucasus is one of the most culturally complex and linguistically diverse parts of the world, often noted for its geopolitical intricacy and intractable conflicts. Despite the importance of the Caucasus, the region is often overlooked in the international media. When noticed, it is usually portrayed as a remote and violence-plagued place, a jumble of mountains situated at the periphery of some other region: the Russian extreme south, the Middle Eastern extreme north, or the European extreme southeast. Great Overview Article > 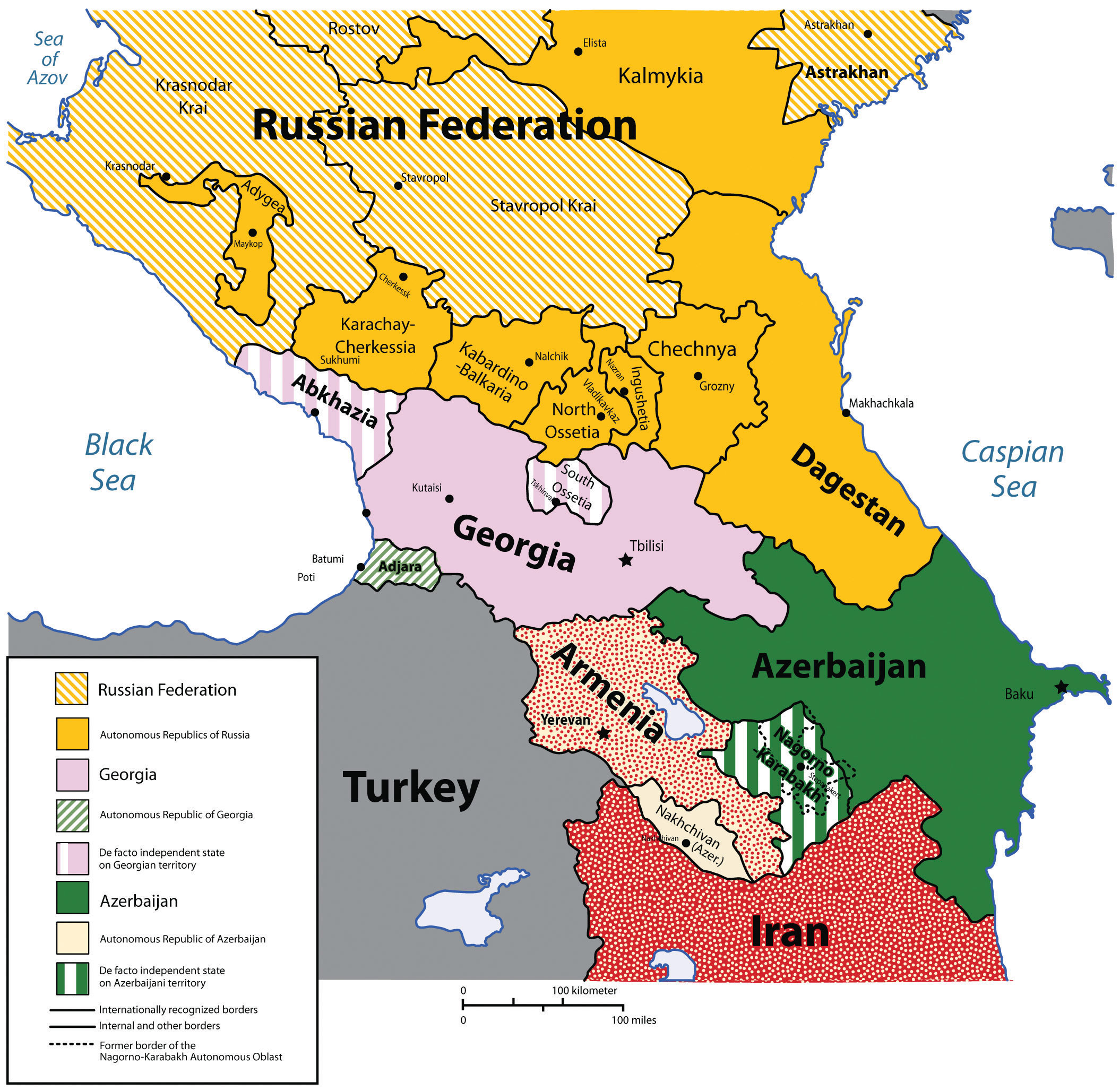 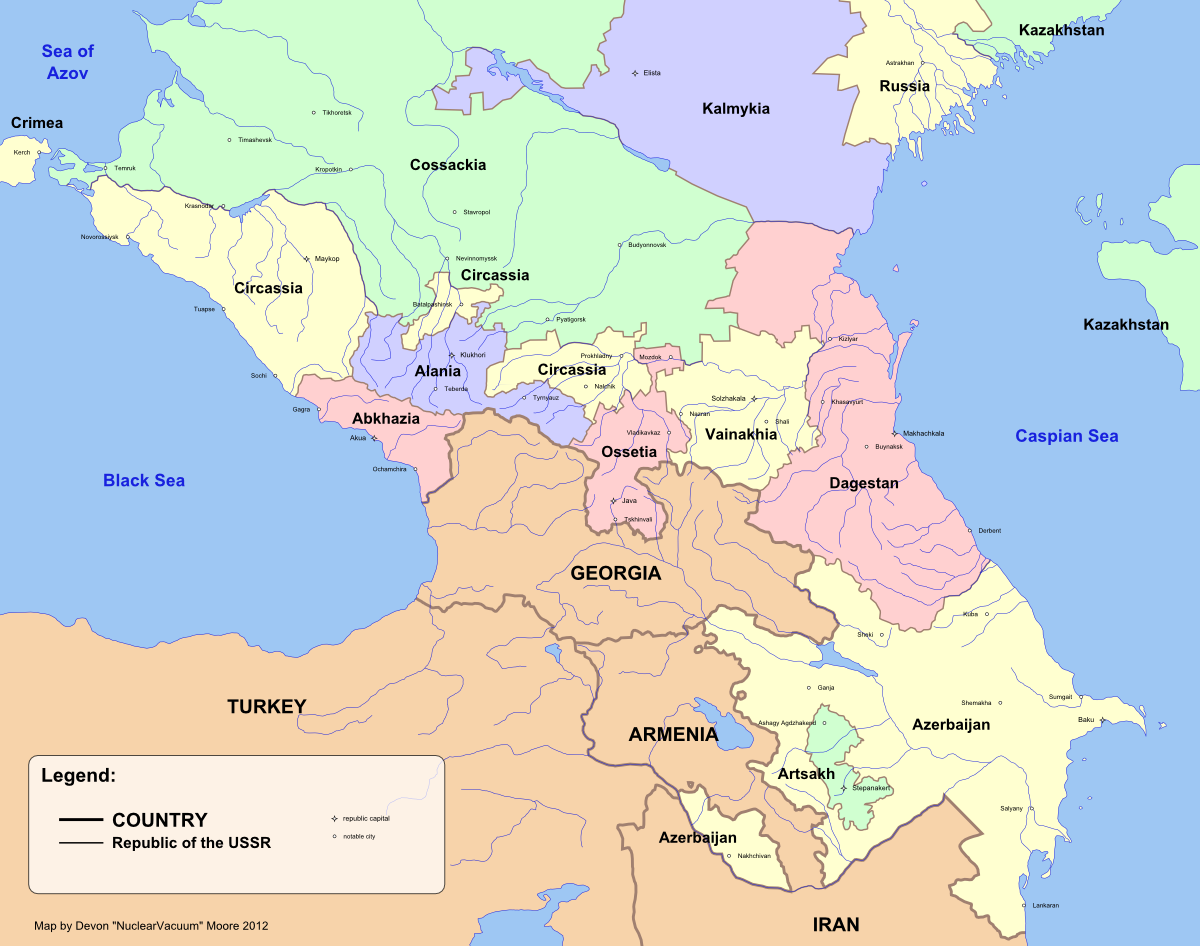 The Caucasus Mountains formed largely as the result of a tectonic plate collision between the Arabian plate moving northwards with respect to the Eurasian plate and the entire region is regularly subjected to strong earthquakes. The Caucasus Mountains are known for the high amount of snowfall: snow cover in several regions may reach 5 metres (16 ft) and Europe's highest mountain--Mount Elbrus 5,642 m (18,510 ft)-- is located in the Caucasus Mountains. 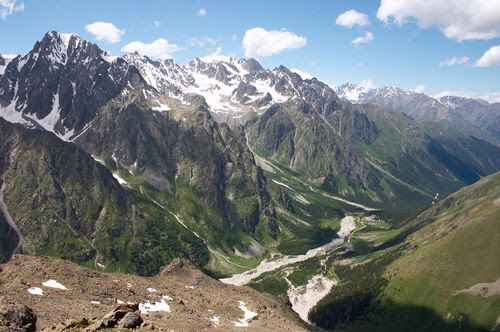 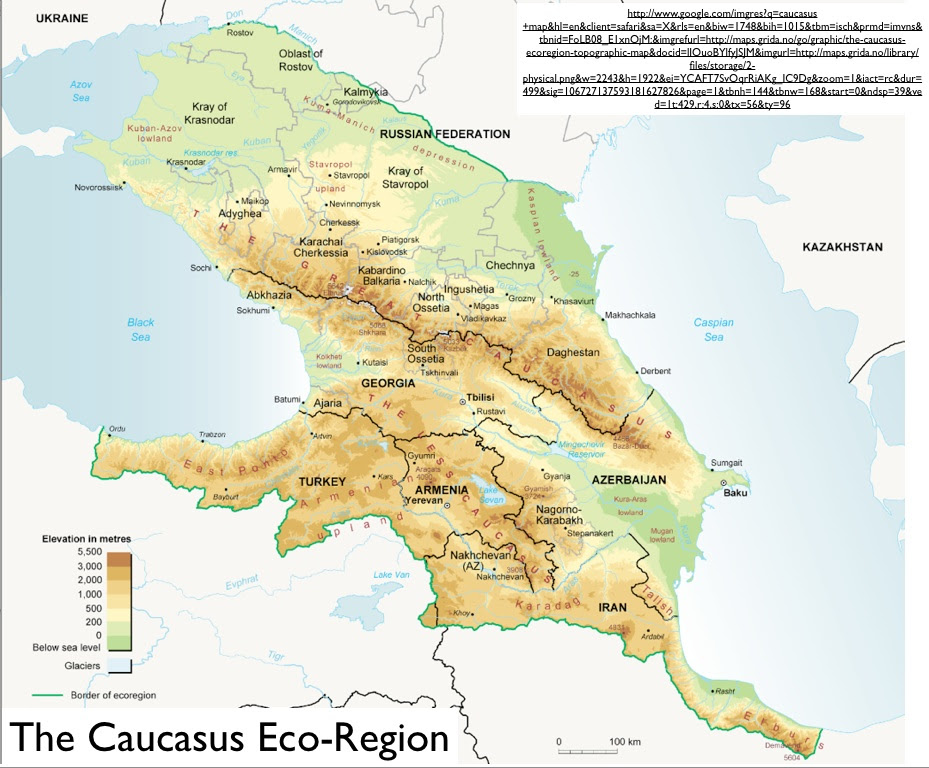 The region has many different languages and language families. There are more than 50 ethnic groups living in the region. 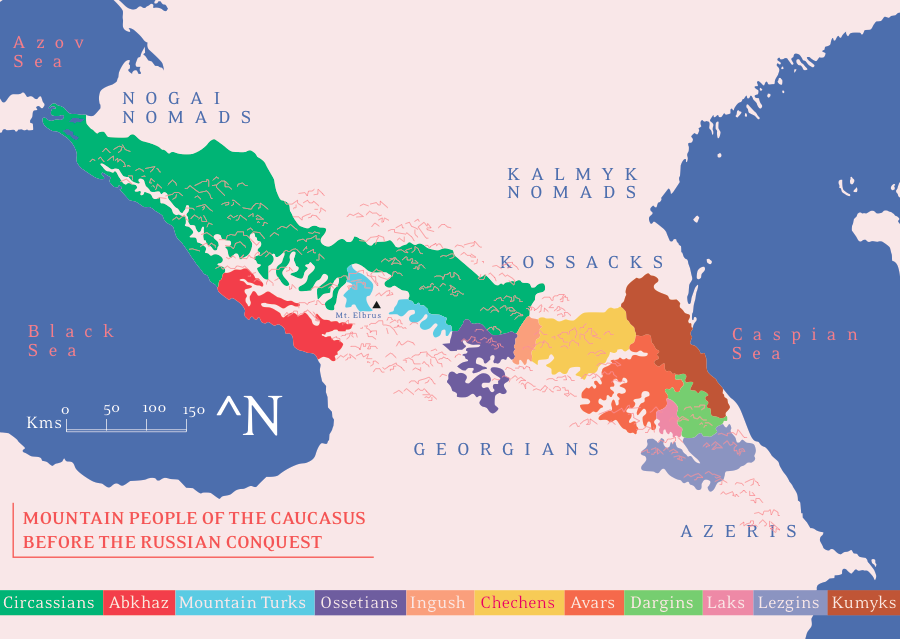 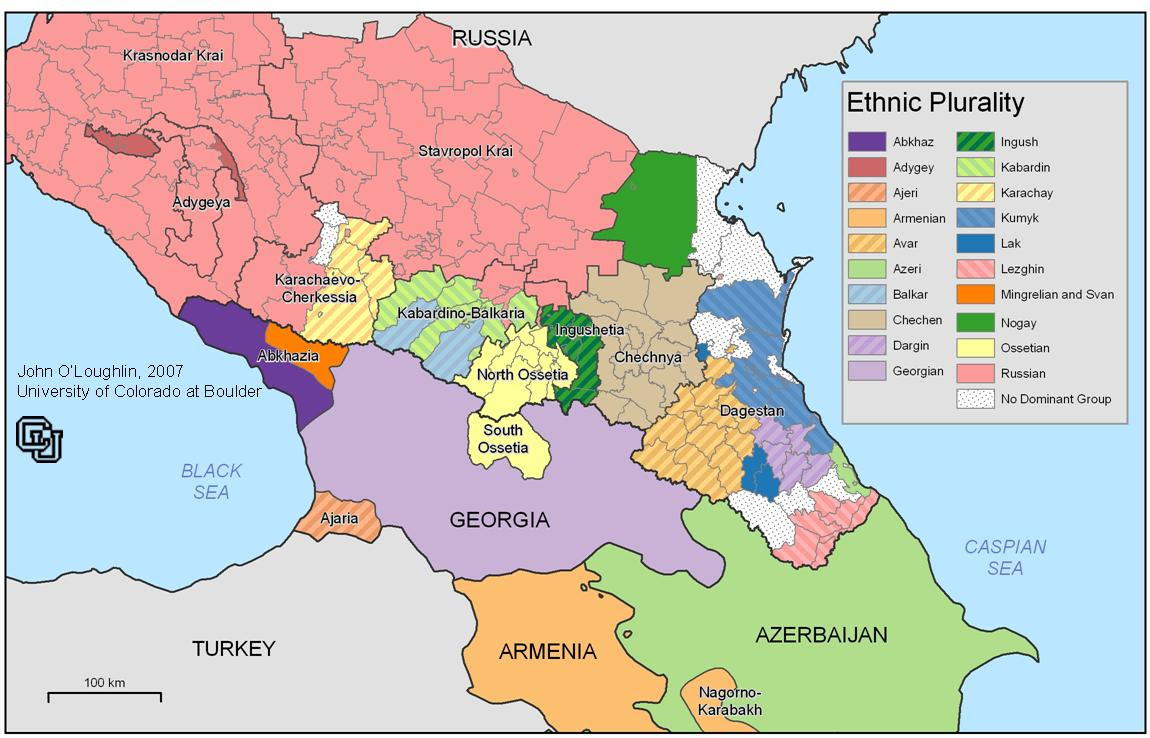 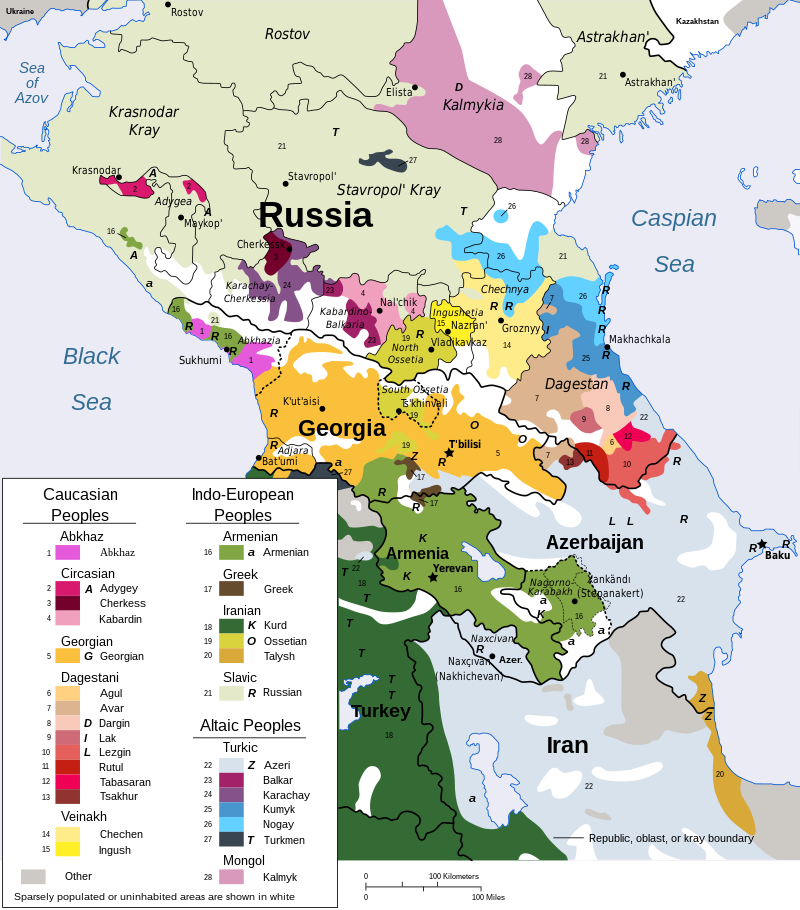 The Caucasus is one of the most linguistically and culturally diverse regions on Earth. 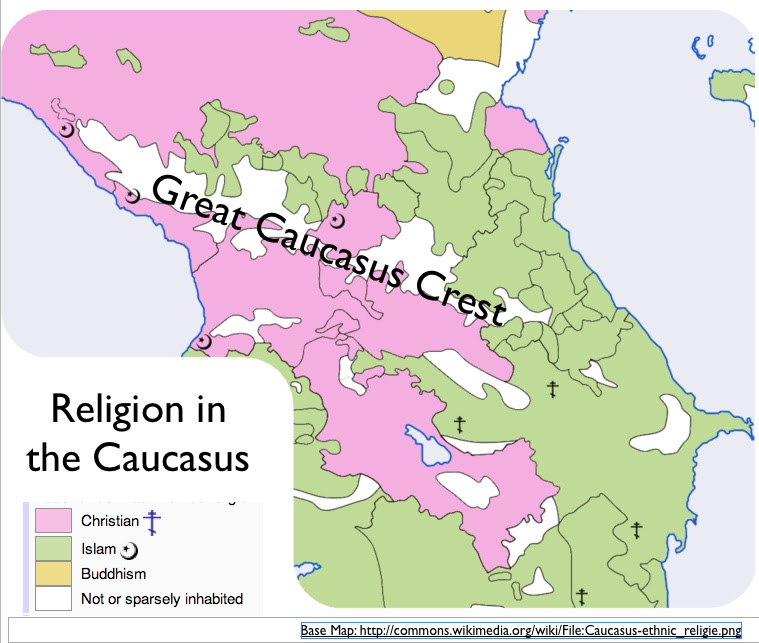 The Caucasus is an area of great ecological importance. The region is included in the list of 34 world biodiversity hotspots. It harbors some 6400 species of higher plants, 1600 of which are endemic to the region.

Instability in the North Caucasus has its roots in centuries of imperial conquest and local resistance. Cossacks began settling the region as agents of Russian expansion in the late eighteenth century, and the Russian Empire waged the nearly half-century Caucasian War from 1817 to 1864. A seemingly never-ending saga of turmoil, the region was a hotbed of dispute between the Ottoman, Persian and Russia Empires.

Lastly, Google “Caucasus At War” for much more in-depth coverage of this subject.
Part Two will be about the lesser known ethnic cleansings and subsequent diasporas in the Caucasus...
Posted by Rich Coffey at 5:35 AM No comments: