An amazing book - abundantly illustrated with maps, old pictures, photographs, and various other diagrams, The Historical Atlas of New York City is a treasure trove of historical info and sheds interesting insight as to how life was at various times through the years past. 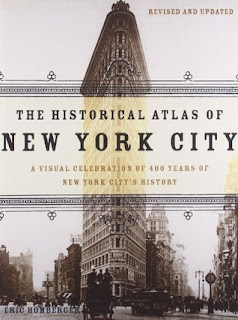 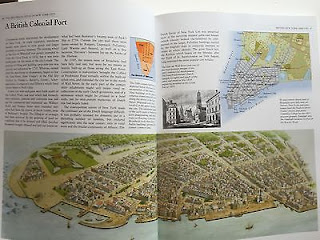 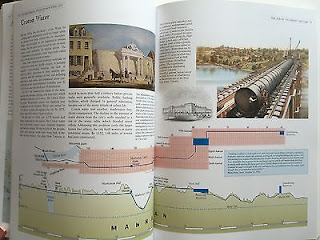 Posted by Rich Coffey at 4:41 PM No comments:

Staggering Discoveries in The Amazon (Part 3)

Archeologists and anthropologists have long hypothesized that Native American ancestors entered from Siberia across Beringia, a land bridge made accessible by a substantial lowering of the sea-level toward the end of the last Ice Age.
The staggering discovery recently of very ancient sites in much of South America that pre-dated by many centuries the long accepted oldest sites in North America has forced archaeologists to reconsider early human migration patterns.

In recent decades, genetics has provided new techniques to shed light on America’s first colonizers, particularly regarding the timing of their arrival and the routes they took.

Archaeological Research in the Amazon

Archaeology in the Amazon has not been easy. Few rock formations in the jungle meant that any ancient buildings had to rely on wood. Once untended, or abandoned, they would soon be quickly swallowed by the jungle and turn to rot. In addition. early South American “monumental architecture” was expressed in packed dirt which was washed back into the alluvial floodplain long ago, effectively preventing archaeological discovery until the recent development of sophisticated techniques of remote sensing and reconstruction.

Detailed below are a few of the highlights of ancient human settlement in the Amazon and elsewhere in Brazil.

Anna Curtenius Roosevelt, the great-granddaughter of United States President Theodore Roosevelt is a leading American archeologist studying Paleoindians in the Amazon basin. In the 1980s on Marajo Island, at the mouth of the Amazon, she turned up house foundations, elaborate pottery and evidence of an agriculture so advanced she believes the society there possibly had well over 100,000 inhabitants. 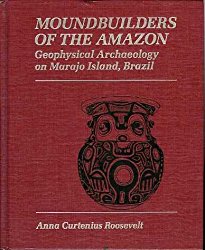 In her book: “Moundbuilders of the Amazon”, Roosevelt documents the existence of a major moundbuilding culture possessing monumental architecture and a rich artistic tradition on the lowland tropical floodplain of Marajo Island at the mouth of the Amazon River in Brazil. A well developed civilization existed there from about 400 AD to 1,300 AD, comparable in many ways to the Inca civilization to the west or to the Aztec and Maya cultures to the north.

Kuhikugu is an archaeological site located in Brazil, at the headwaters of the Xingu River, in the Amazon Rainforest. In this region, A series of settlements connected by roads has been found which may have  have supported as many as 50,000 people. This was covered more extensively on Part 2 (posted previously): Amazon - Indigenous People / Lost Cities?

A cave in the Amazon River basin near the town of Monte Alegre in northern Brazil has yielded evidence that people migrating from North to South America some 11,000 years ago did not settle exclusively in the Andes as previously believed. The new thinking suggests either that Paleo-indians branched east into the tropics or that a separate migration of people was involved. 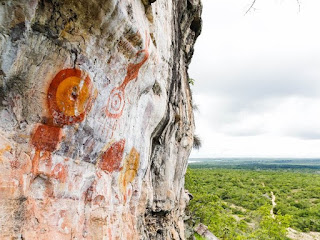 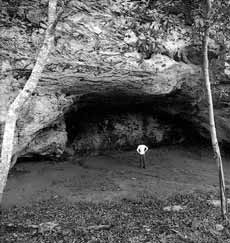 Located in the northeast of Brazil, the state of Piauí contains over 400 archaeological sites and the largest concentration of rock paintings in the world. The area includes a collection of rock shelters used for thousands of years by human populations. 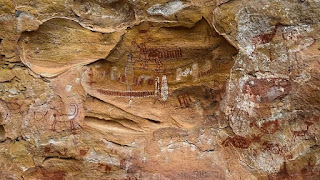 In the Amazon Basin, outside Manaus, Brazil, Eduardo Neves, a renowned Brazilian archaeologist, and American scientists have found huge swaths of "terra preta," so-called Indian dark earth. This is a very dark earth made fertile by mixing charcoal, human waste and other organic matter with soil.  The varied features of the dark earths throughout the Amazon Basin suggest the existence of an extensive ancient native civilization dating back 500 to 25,00 years. In 15 years of work, scientists have also found vast orchards of semi-domesticated fruit trees suggesting large scale agriculture was developed by these ancient settlers.

Lastly — near the village of Calcoene, just north of the equator in the very northern Brazilian state of Amapa — a fascinating grouping of granite blocks along a grassy Amazon hilltop was discovered.

This site may be the vestiges of a centuries-old astronomical observatory — a find that archaeologists say shows early rainforest inhabitants were more sophisticated than previously believed. On the shortest day of the year, Dec. 21, the shadow of one of the blocks disappears when the sun is directly above it.

Posted by Rich Coffey at 7:45 PM No comments: 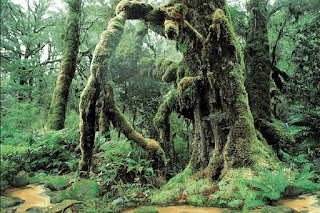 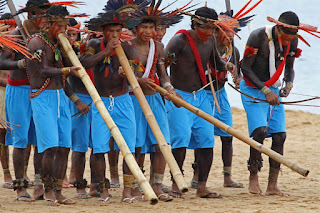 The Kuikuro are an indigenous ethnic group from the Mato Grosso region of Brazil, they are one of the Xingu tribes that are living near the Xingu River. Xingu people represent fifteen tribes and all four of Brazil's indigenous language groups, but they share similar belief systems, rituals and ceremonies. 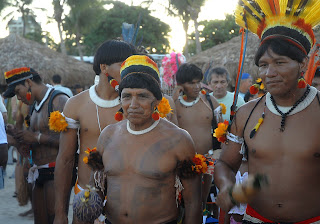 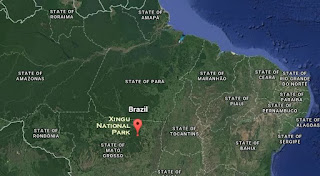 Kuikuro villages are shaped in a circle with a central patio. Their houses--called malocas--are inhabited by one or more extended families. 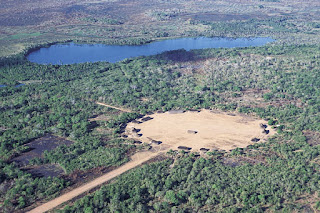 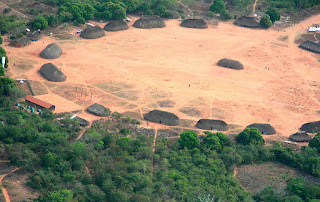 Prior to European Conquest

Many historically-minded researchers, archaeologists and geographers, are now challenging the view of the Amazon being a pure, unadulterated nature, of wilderness little impacted by indigenous peoples. There has been a quiet revolution brewing for several decades that suggests the Amazon was teeming with people in 1492, and that prior to European conquest, over five million indigenous people lived in the Brazilian Amazon.

A series of settlements connected by roads has been found at the headwaters of the Xingu River in an area previously buried beneath the dense foliage in what is now Xingu National Park. This is the proximity where world-famous Percy Fawcett went missing  (see earlier post).

The Upper Xingu region was heavily populated prior to European and African contact. Densely populated settlements developed from 1200 to 1600. Ancient roads and bridges linked communities that were often surrounded by ditches or moats. The villages were pre-planned and featured circular plazas similar to the villages in the region today.

Anthropologist Michael Heckenberger of the University of Florida teamed with the local Kuikuro people in the Brazilian state of Mato Grosso to uncover 28 towns, villages and hamlets that may have supported as many as 50,000 people within the forest—an area slightly smaller than New Jersey. The larger towns boasted defensive ditches 10 feet deep and 33 feet wide backed by a wooden palisade as well as large plazas, some reaching 490 feet across.

Satellite pictures reveal that during that time, the inhabitants carved roads through the jungle; all plaza villages had a major road that ran northeast to southwest along the summer solstice axis and linked to other settlements as much as three miles away. There were bridges on some of the roads and others had canoe canals running alongside them.

Kuikuro oral history says European slavers arrived in the Xingu region around 1750. Population in the region was estimated in the tens of thousands but was dramatically reduced by diseases and slavery by Europeans.

In the centuries since the penetration of the Europeans into South America, the Xingu fled from different regions to escape modernization and cultural assimilation. Nonetheless settlers made it up as far as the upper run of the Rio Xingu. By the end of the 19th century, about 3,000 natives lived at the Alto Xingu, where their current political status has kept them protected against European intruders. By the mid twentieth century this number had been reduced by foreign epidemic diseases such as flu, measles, smallpox and malaria to less than 1,000.

Part Three will be focused on Anna Curtenius Roosevelt's fascinating explorations of pre-Columbian settlement throughout the Amazon. Anna is the the great-granddaughter of United States President Theodore Roosevelt and much of her work challenges the long assumed scientific theories about the lives and migrations of the first Americans.


Lost Cities of the Amazon

Dispelling the Myth of the Amazon
By Michael Heckenberger