The Mellotron was originally developed and built in Birmingham, England, in 1963. The original models were designed to be used in the home, and contained a variety of sounds, including automatic accompaniments! Adopted by the Moody Blues, Genesis and King Crimson, it became a notable instrument in progressive rock. Production of the Mellotron ceased in 1986. 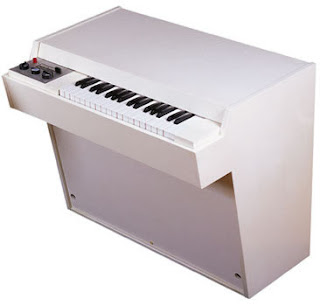 Pressing a key (1), caused two screws (2) to connect a pressure pad (3) with the tape head (5), and the pinch wheel (4) with the continuously rotating capstan (6). Tape was pulled by the capstan at a gradual speed controlled by a tension spring (8–10) and stored temporarily in a storage bin (7) until the key was released.

Posted by Rich Coffey at 5:57 PM No comments: