I am sure most folks know that Manhattan has been expanded outward over the years but did you know that the west side was purposely re-dug and contracted to accommodate the berthing of huge ocean liners?

I just finished this interesting book and learned a lot!
Waterfront Manhattan: From Henry Hudson to the High Line 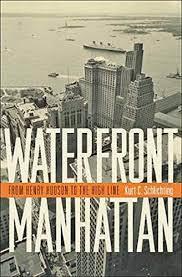 In the early 20th century, New York wanted to build longer piers along the Hudson to accommodate bigger ships such as the RMS Lusitania and the RMS Titanic. However, the United States government, which controls the bulkhead line, refused to allow longer piers to be built. The shipping companies were reluctant to build longer piers further uptown because existing infrastructure such as the tracks of the New York Central Railroad and the 23rd Street ferry station were already in place downtown. To solve this problem, the city took the unusual step of removing the section of landfill on which Thirteenth Avenue ran south of 22nd Street so the Chelsea Piers could be constructed to handle the liners.
Diagram of the relocation of the west side shoreline to accommodate ocean liners: 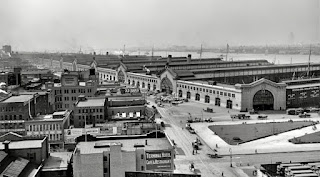 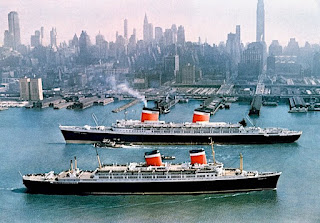 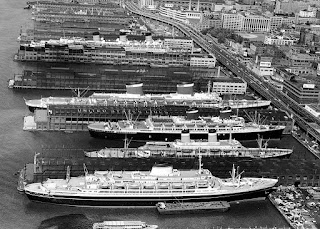 "For the next 50 years, the Chelsea Piers served the needs of the New York port: first, as the city's premier passenger ship terminal; then as an embarkation point for soldiers departing for the battlefields of World Wars I and II; and finally, during the late 1950s and early 1960s, as a cargo terminal.
After that, the Chelsea Piers, like much of Manhattan's waterfront, became neglected maritime relics, made obsolete by the jet plane that whisked passengers across the Atlantic and the large container ships that required dock facilities and truck linkages that Manhattan could never provide.
Chelsea Piers were designed by the architectural firm of Warren and Wetmore, which was also designing Grand Central Terminal at the same time. The Chelsea Piers replaced a hodgepodge of run-down waterfront structures with a magnificent row of grand buildings embellished with pink granite facades." Source

Sadly after World War II, long-distance aircraft became the main form of travel between continents and ocean liners became obsolete. Advances in automobile and railway technology also played a role. As a result,  the huge piers that lined the West side deteriorated. 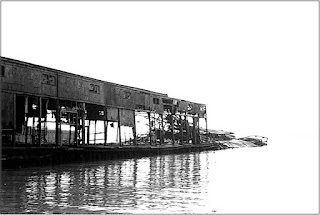 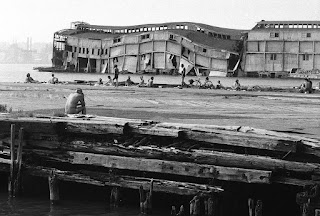 As the automobile and trucks emerged as the dominant means of local transportation across America one solution for the crumbing ruins festering on the West side was to build a highway.
The West Side Elevated Highway was an elevated section of New York State Route 9A (NY 9A) running along the Hudson River in the New York City borough of Manhattan to the tip of the island. It was an elevated highway, one of the first urban freeways in the world.
Built between 1929 and 1951, the highway had narrow confines—which could not accommodate trucks—and sharp S exit ramps that made it obsolete almost immediately. Maintenance was minimal, and the use of corrosive salts to de-ice the highway in winter accelerated its decay. When chunks of its facade began to fall off due to lack of maintenance, and a truck and car fell through it at 14th Street in 1973, the highway was shut down. 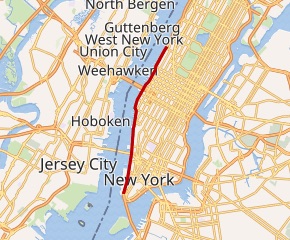 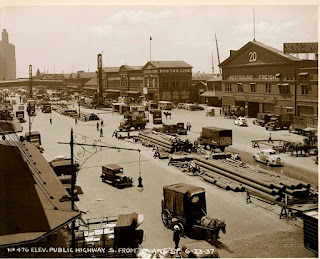 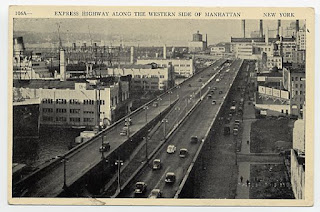 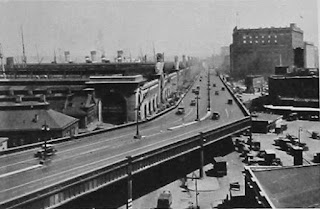 When the West Side Highway was built on an elevated platform, the streets below were lined with shipping piers and warehouses. The road had been built above the grade to get motorists out of the way of the constant flow of trucks moving back and forth between piers and warehouses. With the advent of containerization, shipping entirely disappeared in Manhattan, and the neighborhoods alongside the highway become desolate.

One controversial solution to the deterioration of the West Side Highway was a $2.1 billion proposal to bury the West Side Highway below 40th Street and build a park on its roof: Westway was the largest development battle in New York City history.  From 1971 to 1985, battles raged over Westway. Largely supported by NYC's ultra-rich real estate industry its construction was ultimately defeated by environmental concerns. 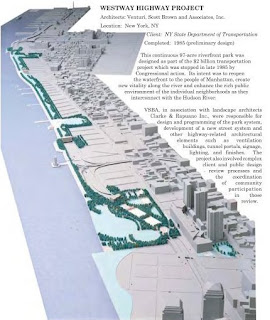 With the the defeat of the Westway project, an alternative was created, throughly revitalizing lower Manhattan, Lower Manhattan was transformed in the 1960s and 70s by an aggressive policy of urban renewal that sought to address the postwar realities of obsolete piers, aging buildings, and an exodus of corporations to midtown and beyond.
With business no longer tied to the waterfront, many firms moved from downtown to midtown or out of Manhattan altogether, attracted by larger offices, lower rents, or both. With no residential population to hold it together, the downtown fabric disintegrated. In the 1960s, the desertion of the waterfront and the downtown business core spurred frenzied debate about urban renewal, resulting in numerous plans and proposals for the city.
The construction of the World Trade Center complex in New York City was conceived as an urban renewal project to help revitalize Lower Manhattan. Lower Manhattan saw less economic growth than Midtown because many workers had moved to the suburbs, and they found it easier to commute to midtown than to downtown. A rejuvenation scheme first put forward in the 1960s proposed a bold solution – reclaiming land from the River Hudson to create a residential neighborhood from abandoned docklands. The land reclamation was finished in 1976 and the first residential building was started in 1980.
Construction of the World Trade Center's North Tower began in August 1968, and the South Tower in 1969. The land which Battery Park City is built upon was created by land reclamation on the Hudson River using over 3 million cubic yards of soil and rock excavated during the construction of the World Trade Center, the New York City Water Tunnel, and certain other construction projects, as well as from sand dredged from New York Harbor off Staten Island. Cellular cofferdams were constructed to retain the material. The complex contained 13.4 million square feet of office space, almost four percent of Manhattan's entire office inventory. 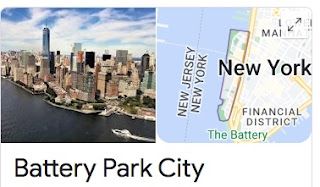 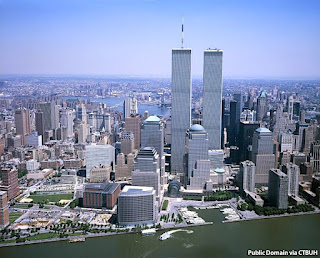 Posted by Rich Coffey at 8:48 AM No comments:

The Russian Empire spanned Eurasia from 1721 to 1917 and also held colonies in North America between 1799 and 1867. Covering an area of approximately 8,800,000 square miles, it remains the third-largest empire in history, surpassed only by the British Empire and the Mongol Empire.

Following Russia's role in defeating Napoleonic France, the Russian Empire played a leading political role in the next century, although its retention of serfdom precluded economic progress to any significant degree. As Western European economic growth accelerated during the Industrial Revolution, Russia began to lag ever farther behind, creating new weaknesses for the Empire seeking to play a role as a great power.

Growth of the Russian Empire 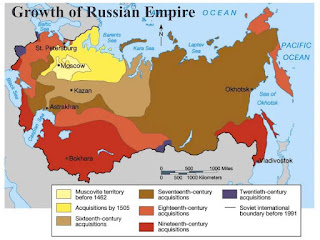 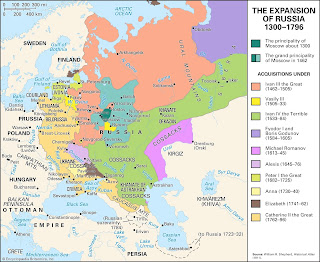 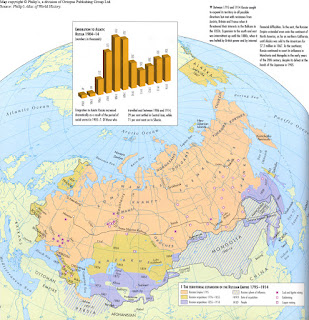 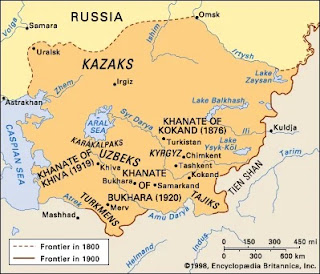 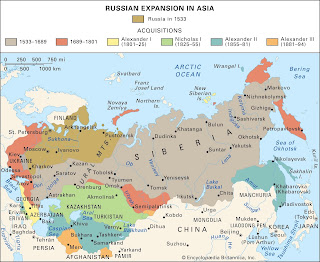 Posted by Rich Coffey at 5:49 PM No comments:

Scribner's statistical atlas of the United States, showing by graphic methods their present condition and their political, social and industrial development. Amazing maps, infographics, etc. from 1880! 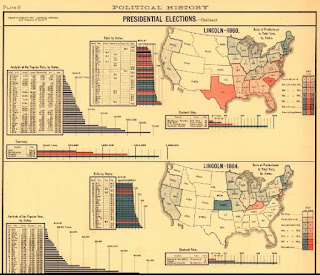 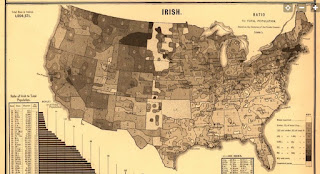 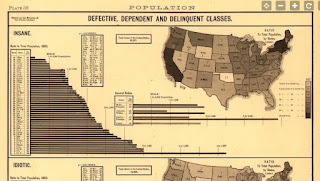 Indian tribes, reservations and settlements in the United States 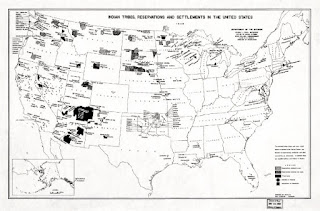 An Amazing Assortment of Railroad Maps

The David Rumsey Historical Map Collection has a great assortment of historical maps, including quite a few railroad maps. The interface to zoom in and pan is really well implemented and the maps listed below are wonderful visual references to the importance of railroading in the late 1800s and the turn of the century.

Lackawanna Railroad.
The Road of Anthracite. Through Car Routes

Interactive Map >
Posted by Rich Coffey at 5:46 PM No comments:

This is a great site - there are a large assortment of map quizzes to choose from. Some are easy, some are fairly difficult! Highly recommended... 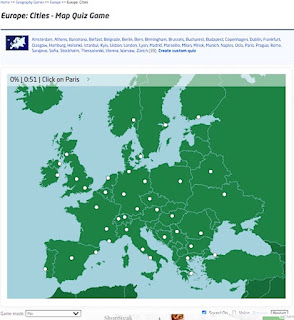 Back in the glory days of railroading... 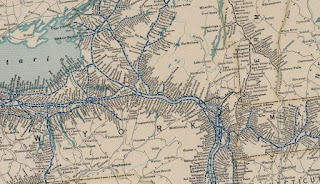 From the David Rumsey Collection