Humans have long tracked the movements of animals by following their paw prints or staking out their natural habitats. That kind of observation still has its value today, but now biologists also benefit from a slew of satellite, radio, and GPS technologies that can track the digital footprints of, say, a herd of elephants or a flock of storks as they move across the globe. And at a time when both climate change and urban development are changing—and disrupting—the migration routes, there’s a new urgency in these kinds of research. 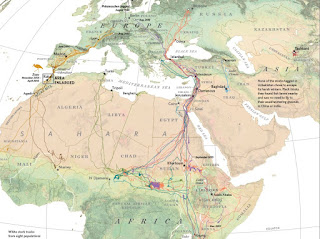 In southern California, mountain lions are in decline in part because of the expansive freeways that crisscross the state. When researchers tagged a sample of lions in Santa Ana with GPS devices, they found their natural habitats divided by as many as eight lanes of traffic, as well as houses, golf courses, and other private developments. 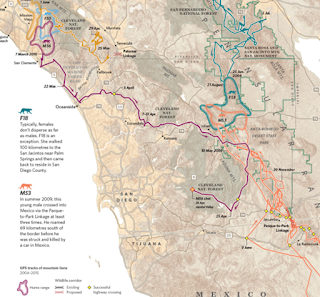 Despite proposals to build animal crossings after the fact, over- and underpasses have proven ineffective; they’re rarely used by the big cats. The risks go farther than just ending up as roadkill. The roads themselves become cages for mountain lion populations, isolating various groups and resulting in higher rates of inbreeding. This threatens their growth and survival as a whole.

How Human Activity Is Changing Animal Migration Patterns
Its a fascinating read...
Posted by Rich Coffey at 6:01 PM No comments: