How Slavery Expanded Across the United States

By the 1860s, the U.S. had an economic system that kept nearly 4 million people in bondage. Interestingly, a Coast Survey map created and compiled from the 1860 census depicted the percentage of the population enslaved in each county. Abraham Lincoln consulted it throughout the Civil War.

Slave labor was integral to the plantation economy of the south and of course cotton was one of its main products
. 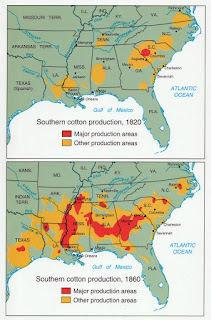 The slave population  grew in intensity in places around the Chesapeake Bay, even as slavery was gradually abolished in the North. But for the most part the slave population spread westward to the lands opened for settlement by the Louisiana Purchase, the dispossession of the Indian nations of the Southeast, the war with Mexico, and the distribution of public lands. Slavery spread rather than grew because it was an agricultural rather than industrial form of capitalism, so it needed new lands.

The unceasing spread of slavery provoked political crises, eventually leading to the Civil War. As Abraham Lincoln put it in is 1858 "House Divided" speech:

"Either the opponents of slavery, will arrest the further spread of it, and place it where the public mind shall rest in the belief that it is in the course of ultimate extinction; or its advocates will push it forward, till it shall become alike lawful in all the States, old as well as new, North as well as South." 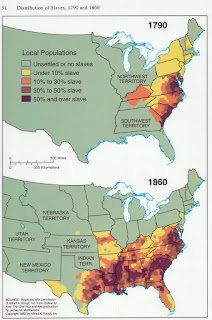