US Westward Expansion and "Manifest Destiny"

What was Manifest Destiny"?

Manifest destiny was a widely held American imperialist cultural belief in the 19th-century United States that American settlers were destined to expand across North America.

Historian Frederick Merk says this concept was born out of "a sense of mission to redeem the Old World by high example ... generated by the potentialities of a new earth for building a new heaven". However, in contemporary culture many have condemned manifest destiny as an ideology that was used to justify genocide against Native Americans.

Historians have emphasized that "manifest destiny" was a contested concept—Democrats endorsed the idea but many prominent Americans (such as Abraham Lincoln, Ulysses S. Grant, and most Whigs) rejected it.  Wikipedia

"Our manifest destiny to possess the whole of the continent."
-attributed to Newspaper editor John O'Sullivan in 1845

Manifest Destiny - the 19th-century doctrine or belief that the expansion of the US throughout the American continents was both justified and inevitable. 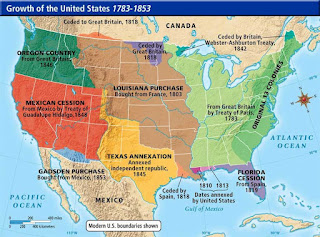 Nevertheless despite Lincoln's reluctance in endorsing manifest destiny,  the U.S.'s First Transcontinental Railroad was built between 1863 and 1869 to join the eastern and western halves of the United States. Begun just before the American Civil War,  the Railroad Act of 1862 put government support behind the transcontinental railroad and helped create the Union Pacific Railroad, which subsequently joined with the Central Pacific at Promontory, Utah, on May 10, 1869, and signaled the linking of the continent.
In obvious disregard to long-standing Native American settlement, railroad workers' wages were to be paid in land, thus ensuring that there would be settlers along the route to supply produce to and become patrons of the completed linkage. 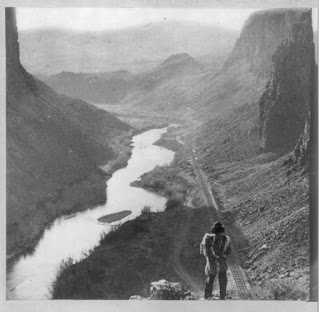 Shortly thereafter (starting in 1881) many other transcontinental railroads were built (the Southern Pacific Railroad , the Northern Pacific Railway, the Great Northern Railway, the precursor to the Santa Fe Railroad, etc.). These transcontinental railroads facilitated the colonization of western territories by encouraging new settlements on Indigenous lands.  In the process, Native Americans were decimated and the vast herds of buffalo were nearly exterminated.

"The Oxford English Dictionary defines colonialism as “colonization by settlement.” In the case of the U.S., Canada, and other settler colonies, colonialism was a process that replaced existing, Indigenous communities and ways of relating to the land with settler populations, and settler ways of life." The impact of the Transcontinental Railroad on Native Americans