Rupert’s Land was a vast territory of northern wilderness. It represented a third of what is now Canada. From 1670 to 1870, it was the exclusive commercial domain of the Hudson’s Bay Company (HBC) and the primary trapping grounds of the fur trade. The territory was named after Prince Rupert, the HBC’s first governor.

By 1870, the Government of Canada acquired Rupert’s Land from the HBC for $1.5-million. It is the largest real estate transaction (by land area) in the country’s history. The purchase of Rupert’s Land transformed Canada geographically. It changed from a modest country in the northeast of the continent into an expansive one that reached across North America. Rupert’s Land was eventually divided among Quebec, Ontario, Manitoba, Saskatchewan, Alberta and the Northwest Territories. 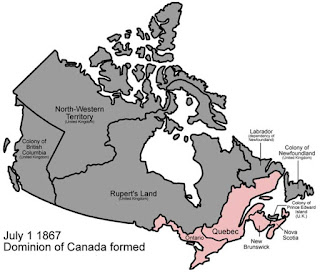 The charter signed by King Charles II gave the HBC complete control of the territory. Almost no thought was given to the sovereignty of the many Indigenous peoples that had lived there for centuries. The HBC established forts and trading routes through much of the territory. The Cree, Assiniboine and other groups supplied the Company with furs, or acted as middlemen for other Indigenous fur suppliers. The Indigenous groups either took part in the growing trading economy or were directly employed by the HBC. The fur trade changed the Indigenous economy. Rather than hunting and trapping for subsistence, people now trapped in exchange. 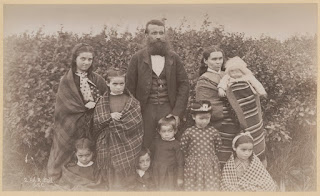 Unidentified Métis Family
(photo by Robert Bell, courtesy of Library and Archives Canada)
In this family portrait above, we see the blending of two cultures. The father wears a European suit adorned with a pocket watch. The mother, who might be Métis1, holds their infant in a cradle board, traditionally used by First Nations peoples. The shawls, worn by several of the women and girls, reflect Métis culture.
The above sourced from this excellent article:
Rupert's Land (The Canadian Encyclopedia)
1 - Métis
The Métis are Indigenous peoples in Canada and parts of the United States who are unique in being of mixed Indigenous and European (primarily French) ancestry. In Canada, they are considered a distinct culture, and are one of three groups of Canadian Indigenous peoples referenced in the Constitution. Métis (Wikipedia)